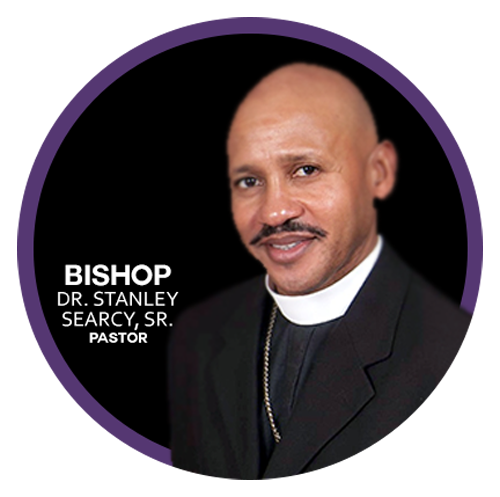 Bishop, Dr. Stanley B. Searcy, Sr., along with his lovely wife Brenda is the founder and visionary of New Hope The Vision Center in Natchez, Mississippi. He is a native of St. Louis, Missouri, who grew up in Natchez, Mississippi. He was called to the ministry in 1982 under the ministry of the late Bishop Philip Coleman of Greater Bethlehem Temple in Jackson, MS. Having been in ministry for over 32 years now, he keeps Luke 16:12 always in focus, which says, ‘if you have not been faithful over that, which is another man’s who will give you your own?’

Bishop Searcy along with his wife Brenda began full-time ministry in 1993 through cell groups, going house to house. In 1994 before and after moving back from Mobile, Alabama, they started bible studies in the Natchez, Fayette, and Vicksburg, Mississippi areas.

Under their leadership, the church has been blessed in every area of ministry. After four years of increase, he was led to build a multi-million dollar facility. After trusting God, much hard work, and many hours of prayer the new sanctuary was completed for worship on March 23, 2003. Bishop Searcy’s vision spreads beyond the four walls and reaches into the community. He led New Hope into the first phase of community development with the Washington Apartment complex project which was completed with 10 family units adjacent to the church in 2011.  The development recently expanded with 20 additional apartments added to this complex in the fall of 2013. Under the leadership of Bishop Searcy the Lord has allowed the church to acquire with His favor the Brumfield apartments, which is a 30 unit complex that the church has partnered with the city to restore.

Bishop Searcy established a network of churches here in the United States, India, and Africa, called the International Kingdom Covenant Churches. He was ordained a Bishop by The International Community of Charismatic Churches. He has been licensed in Crisis Counseling, served two years as President of the Ministerial Alliance in Natchez, MS., Has a Doctrine in Theology and Doctrine of Philosophy in Christian Counseling. He has been a guest on the Word Network as well as TBN. He has been commended by the American Red Cross and United Way along with receiving the key to the city by the Mayor of Natchez for his and the church outstanding service during the Katrina Storm in 2005 in serving over 15,000 people from Texas to Louisiana. He has been award “Most Loved Pastor” by Gospel Today and has been a recipient of “The Man of the Year” award in Natchez. In 2014 Bishop was awarded the Jefferson Award established by Jacqueline Kennedy Onassis for his achievements and contributions through public and community service.

Bishop Searcy is a preacher and a teacher whose heart is toward the community and empowering the people by reaching the total man. As he faithfully serves, Bishop is daily reminded of when Mary the mother of Jesus told the servants at the marriage of Cana, ‘Whatsoever he saith unto you, do it.’ (John 2:5) That phrase is the motto for his life, ‘I will do whatever he says, at any cost.’

make disciples of all nations, baptizing them in the name of the Father and of the Son and of the Holy Spirit.